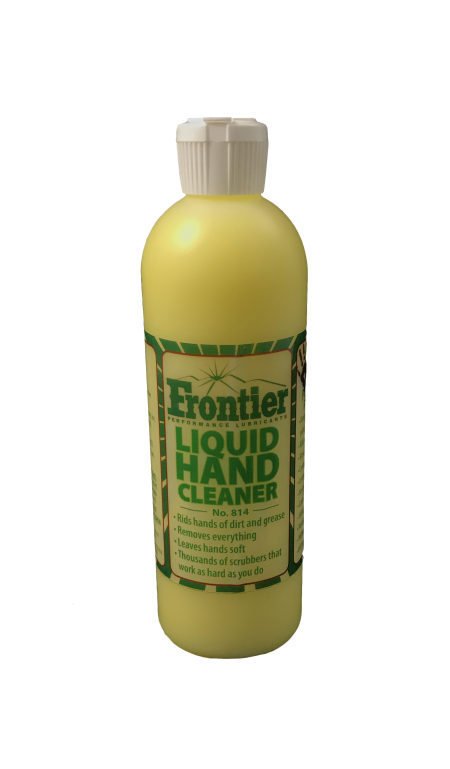 We have simply been unable to find anything the working person gets their hands into that Frontier Hand Scrub With Power Scrubbers can't remove; tar, asphalt, grease, oil, bondo, glue, adhesives, paint (wet or dry), printer's ink (that's what it was designed for), etc...

Frontier Hand Scrub With Power Scrubbers contains absolutely NO petroleum OR citrus-based solvents of any kind in the formula. Don't be fooled by other hand cleaners that offer "clean citrus" formulas. All they do is substitute d'limonene (turpentine made from orange peels) or some other harsh chemicals which are terrible for your hands.

That works out to about 2 cents per wash, saving up to 58% compared to most brands on the market! GOJO, DL, Loyal, Zep and most average waterless and non-waterless hand cleaners range in cost from about 8 to 12 cents per wash!

Normal washing with Frontier Hand Scrb requires only a small amount of hand cleaner, about the size of a quarter……...

AND COSTS LESS THAN 2 CENTS PER WASHING! A SAVINGS OF UP TO 58% OVER MOST BRANDS!!

Available in a 64oz. Paste & wall dispenser, or in a convenient liquid 16oz. Squeeze tube.

Frontier Hand Scrub With Power Scrubbers is the most advanced hand cleaners on the market.

Frontier Hand Scrub With Power Scrubbers uses no solvents or harsh chemicals and is non-abrasive. It is good for your skin and actually heals your hands.

Frontier Hand Scrub With Power Scrubbers is a chemical formula which can be considered as of negligible toxicity.

It has a delicate Ph of just past neutrality at 7.4 to 7.6. It is compounded with mild, biologically harmonious ingredients in a combination that is considered compatible with human body systems. However, as safe as it is , it is not advisable to eat it or get it in your eyes. Treat it in the same fashion as an adult hair shampoo. It is very difficult to swallow any of it because it produces a gag reaction. But, even if it were ingested, the most harm would be a little diarrhea because the detergent action would destroy non-pathogenic bacteria present in the intestines.

Concerning compatibility as a part of naturally occurring ecological systems, Frontier Hand Scrub With Power Scrubbers has been designed to be chemically sympathetic with the balance of life structures and chemical materials found in such natural environments as rivers, lakes and streams.

The cleaning emollient portions of Frontier Hand Scrub With Power Scrubbers is made up of anionic and non-ionic surfactants. Further, it contains no phosphates, but biologically disassociating chemicals that are classified as completely biodegradable.

The abradant is not biodegradable, but it is not considered a pollutant. This plastic material, used as a scrubbing agent, is polyethylene in granule form. Polyethylene has been tested and accepted by the pharmaceutical industry for use in facial cleansing preparations designed as adjunctive treatments for acne conditions. The logic behind their choice, as ours, is based on the phenomenon that this material is a straight chain polymer.

That is to say there are no side chains or radicals attached:

In fact, it has no other elements of any kind, other than pure carbon and hydrogen. This means it will not break down into something harmful or split off anything that would be toxic. On the other hand, plastics such as vinyl, polyurethane, or even rubber have chlorine and other radicals which split off when exposed to heat or merely exposure to the environment.

The granules described above are of a controlled particle size. The individual particles are held to less than 25 micron average diameter, with all of them less than 34 microns. This is smaller than many airborne dust and sand particles that are a continuing part of our natural environment.

Since the granules in Frontier Hand Scrub With Power Scrubbers, as well as those of many pharmaceutical preparations, do not fractionate or disassociate or dissolve but are of a stable compound, they in a very real sense are synonymous in their ecological role as the sand or dirt that would be on skin or clothing that is washed and then goes down the drain.

The comparison is even more valid when one considers that sand, SiO2(silicone dioxide), is also not biodegradable. It is also washed down the drain and into the water system. It, of course is also stable and merely becomes a part of the sand bank of the rivers, streams and oceans. The granules of Frontier Hand Scrub With Power Scrubbers functions entirely and exactly through their cycle in the same manner as the tiny sand or dirt particles and come to rest at last in the same place, doing the same thing.

Therefore, it can be seen that Frontier Power Hand Scrub With Power Scrubbers is a biologically harmonious chemical system that has been designed to be totally bio-compatible with natural life support ecological systems.